The 8-block Main Street business district, listed on the National Register of Historic places, is the background for a fascinating walk through Ashland’s history as seen through the eyes of Ashland’s mural artists Kelly Meredith and Susan Prentice Martinsen.  See map at the bottom of the page. 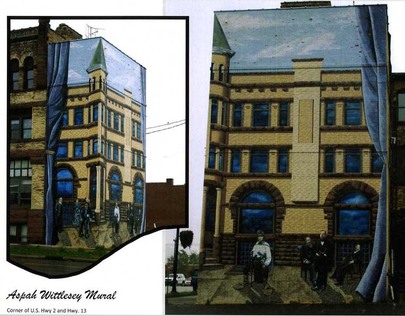 The Asaph Whittlesey Mural depicts the Ashland National Bank as it appeared in 1892.  The bank was located on the Main Street end of the building where the Mural is painted.  This was Ashland's first mural and it represents Ashland's early founders.  On the north wall from left to right we see: Asaph Whittlesey, Edwin Ellis, Samuel Stuart Vaughn, Sam Fifield, Dr. John Morris Dodd, Emeline Patrick Vaughn, and Chief Moses Buffalo.

Whittlesey is credited as founder of the community in 1854.  He is pictured in his snowshoeing garb, which he wore on his infamous trip to Madison to take his seat as our first representative in the Wisconsin State Legislature in 1860.  In the dead of winter he walked on woodland trails from Ashland to Sparta, a distance of about 200 miles, where he was finally able to board a train.  Ellis was the County Judge, a medical doctor, teacher, merchant and a member of the group that founded Northland College.  Mr. Vaughn owned 160 acres in the center of Ashland and built the fist major commercial dock on the Chequamegon Bay.  Fifield managed the old Chequamegon Hotel, founded the Ashland National Bank and served as the Chairman of the Town Board.  Fifield founded the Weekly Press in 1872 with his brother Hank.  Dr. Dodd opened the Dodd Hospital at 610 Ellis Avenue, started the first nursing school here, built the first Doctors Clinic and started the Ashland General Hospital.  Mrs. Vaughn built the Vaughn Public Library in her husband's memory in 1888, and presented the library to the City.  She also founded the Ashland Monday Club in 1891.  Chief Moses Buffalo is best remembered for the trip he made at age 93 to Washington D.C. in 1852.  The journey, mostly by water, was to petition President Millard Filmore not to remove the Ojibwe from their land in Wisconsin. 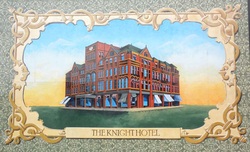 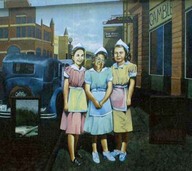 The owner of the building wanted to honor Florence Dufek Larson who helped raise him and who had recently passed away.  On the left is Florence, on the right is her sister-in-law, Delores Larson Vranes, and in the center is Priscilla (Stelmaszewski) Muse, fondly known as "Percy."  The mural was painted from a photograph taken in the 1940's in front of the building the mural was painted on. 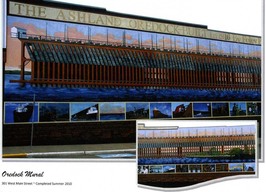 Built in 1916 and extended in 1924, this reinforced concrete ore dock, at 1,800 feet long, was at the time the largest concrete dock in the world.  Shipping was an integral part of Ashland.  The ore dock was used by the Soo Line Railroad to transport upper Michigan iron ore to the ships waiting in Ashland’s harbor.  The ships then delivered the ore to steel mills of the Midwest.  Many young men took up life working on the ore docks and the Great Lakes ore boats.  Money earned at these jobs helped to further their education, helping many to advance their professional careers.  The top portion of the mural is a “to scale” painting of the ore dock itself, including every properly numbered ore chute.  The lower section includes 21 “postcards” telling the history of the varied uses of the structure over the years. 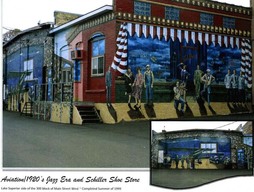 This mural celebrates Ashland’s early aviation history, the roll of jazz and music in our past, and Schiller’s Shoe Store which was located in the store it is painted on.  Those featured in the early aviation part from left to right are: Joe Ante, Lieutenant Howard Bretting, H. Paul Culver and his wife Edith Dodd Culver, the banjo player is Oscar Hagstrom, and on the right is John C. Chapple.  Around the corner of the building the mural features some of Ashland's local jazz musicians and friends: Martin Lamoeaux, Fred Smith, George Carlson, Martin Lamoreaux, Fred Smith, Alice Carlson, and Ted Mesang the High School Band and Northwood's Orchestra director.  At the far end are the employees of Schiller's Shoe Store: Edwin Bloomquist, Hilding Branzell and the store manager Walter Goeltz.

The Lumberjack Mural depicts the men (and one rare woman) of Ashland’s lumber era, when the work day was from 4 am until dark, first freeze to first thaw.  An average day’s work for a pair of “sawyers” was 100 pine logs, at $1.00 a day.  In 1893, 10,000 lumberjacks worked in the logging camps to supply Ashland’s ten sawmills.  All the lumberjacks portrayed are actual people.  For this mural, artists Meredith and Martinsen asked for old photos of lumberjacks who worked in the region.  Twenty-two were selected on the basis of the clarity of the picture, its design, and evidence of interesting logging implements in the photos. 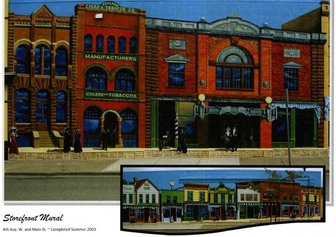 A compilation of various Ashland storefronts from the early 1900’s. At the request of the building owner, the artists featured a variety of architecture found in the Ashland area.  The artists did their research at the Ashland Historical Museum where they found lots of information. The buildings in the mural were not placed in the order in which they used to appear on the actual street. 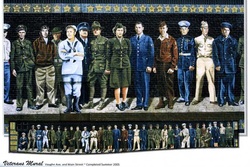 This mural is in honor of all the Ashland Area Military Men and Women who served our nation in various wars and conflicts.  Their sacrifices will never be forgotten.  We proudly salute them all.

All of the veterans painted in the mural are actual people from the area.  It is a portrait of local veterans representing the service that they were in, and is a tribute to them.

The Ashland Mural Walk Project is sponsoring a railroad history mural which features the men and women who helped establish and run the railroad industry in the North Woods.  This mural is in progress, it is on the Maitland, Singler and VanVlack Building located at 306 3rd Street West in Ashland, WI.  The Chicago Northwestern section (see image) was painted during the summer of 2013, and the second section about the Soo Line was painted in 2014. 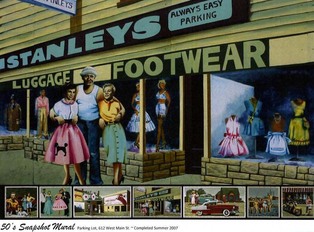 A 1950’s hamburger/ice cream shop at that time was in the planning stage, and the artists were asked to design a mural that would depict the 1950’s era.  They decided on portraying snapshots from a photo album of the time.  All of the outfits and scenes are accurate representations of the 1950's, and famous men and women of the 1950's are also shown including Bing Crosby and George Reeves at a family picnic, Lana Turner in a bathing suit snapshot, and Perry Como on a motorcycle by Rosemary Clooney. 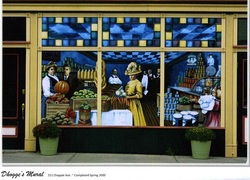 This mural depicts Dhooge’s Grocery of Ashland in 1910.  An era when settlers were “Farming the Cut Over” and going to town for supplies often meant a two day event for area settlers.  This mural was painted from actual photographs, and was the first one done in a studio on boards. The people's faces were taken from yearbooks, the Ashland museum, and some photos that were sent in. In the mural you will find William Leahy, an 1892 Ashland High School graduate who went on to become an Admiral in the US Navy and Chief of Naval operations in the late 1930's.  Leahy is pictured here as a civilian in a nice brown suit. 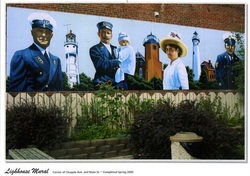 This mural depicts 3 lighthouses (Devils Island, Sand Island and Outer Island) located within the Apostle Islands in Chequamegon Bay and the lighthouse keepers. Alphonse Gustafson was keeper at the Devil's Island Lighthouse from April 1945, until his death in 1951.  The people in the center are Emanual Luick and his family, who lived and served at the Sand Island Light.  Outer Island lighthouse is shown with its keeper, A.G. Carpenter. 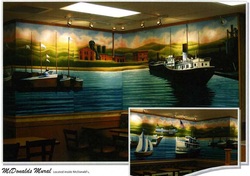 Inside the McDonald's restaurants, this mural portrays the Ashland bay front in the 19th century: old steam and sail boats at the ore dock, the original Hotel Chequamegon, and a blast furnace at the Ashland Iron and Steel Company.   Also shown are boats transporting lumber and others parked by the side of the coal dock.  This mural was also completed in the studio on panels. 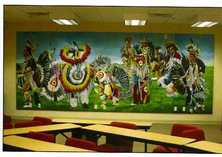 This mural depicts the historical regalia of the ten tribes represented by the BIA in Northern Wisconsin.  It is spread out over three separate walls in the interior of the BIA’s conference room, check in at the door and if the room not in use it is open to the public.  The first panel represents the beginning of a Pow Wow with the entrance of the flags and eagle staffs.  The second panel represents the male dancers in their traditional clothing.  The third panel shows women and children dancers.  All of the Native Americans portrayed are actual dancers and members of local tribes. The artists collaborated with Native American tribes in the area to ensure authenticity, and they worked with three Native American volunteers who helped with the initial outline of the mural.  Traditional clothing, staffs, walking sticks, and turtle rattles were brought into the studio to ensure accurate representations in the drawings.

The artwork shows off the magnificent scenery of the Apostle Island National Lakeshore in 14 postcard-like displays in honor of the National Park Service's 100th anniversary.  Located on the former Wallie Motors Building sidewall facing Ninth Avenue West, the Apostle Islands murals focus on the beauty of the “Crown Jewels of Lake Superior” and their awe-inspiring beauty.​ 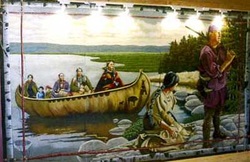 “The Community of Life: Our Evolving Relationship with the Land” mural is sponsored by The Friends of the Center Alliance.  This mural graces the inside walls of the Northern Great Lakes Visitor Center’s tower located 2.5 miles west of Ashland on Hwy 2.  The Community of Life mural depicts human's evolving relationship with the land over the past 500 years.  The six sections of this mural show the Anishinaabe People, the fur trade, commercial fishing, logging, agriculture, and tourism. 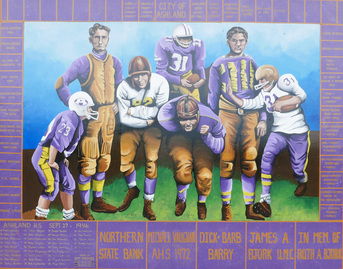 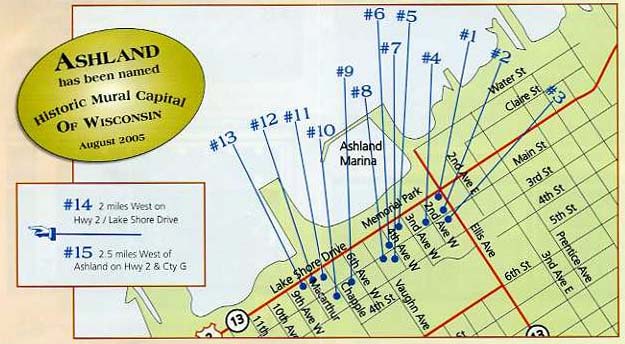