On Display at the Museum! 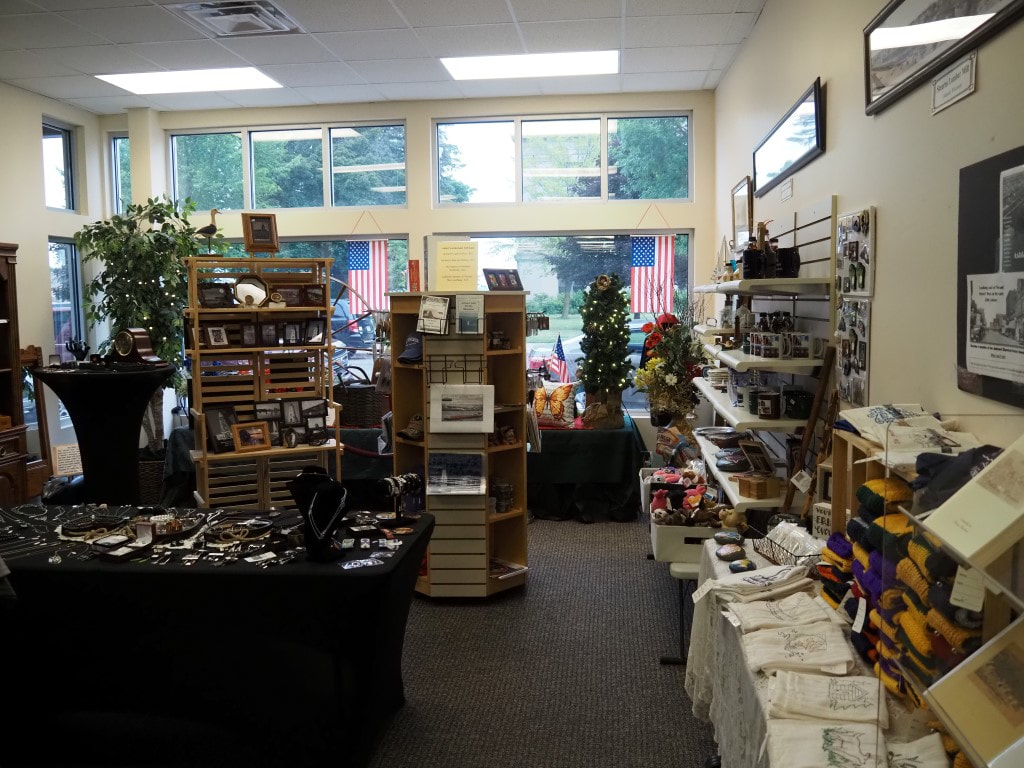 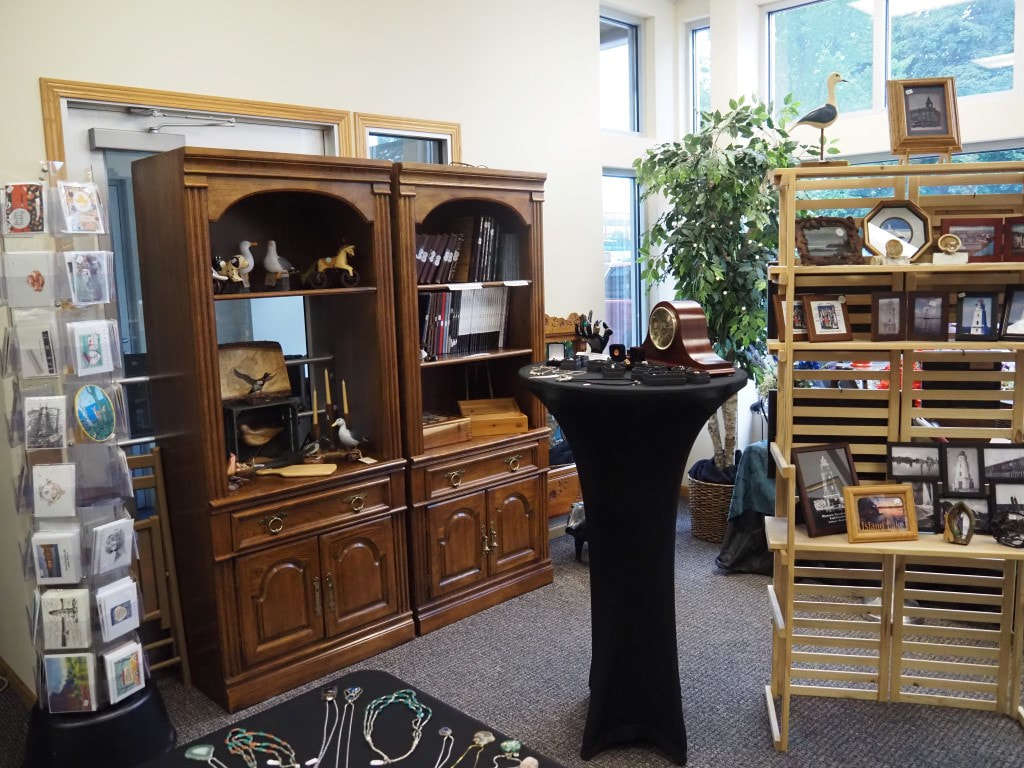 The Museum Gift Shop offers a wide variety of items that are not always available at other shops in the Ashland area.  Beautiful jewelry at realistic prices, pictures of local area sites, hand carved items, locally made products and cards.  Also, a variety of new and used books many about the history of the Chequamegon Bay area. 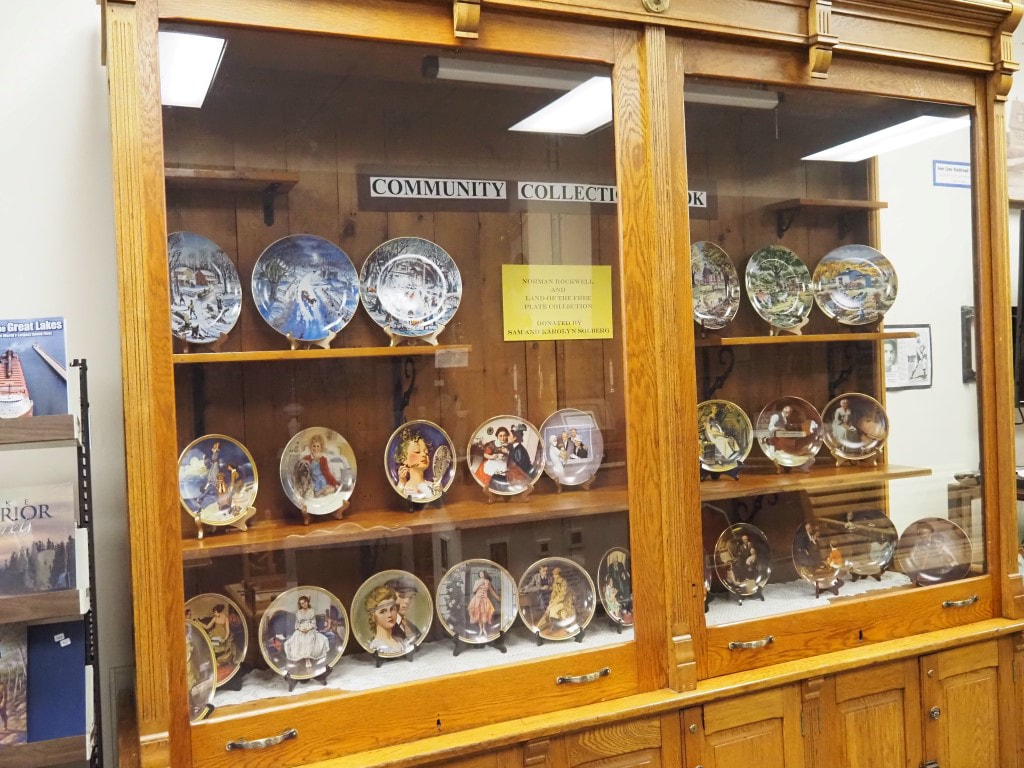 Norman Rockwell Collection
The beautiful plates inspired by the pictures painted by Norman Rockwell are in our Community Nook Display Case.  This collection has been donated to the Ashland Museum by Sam and Karolyn Solberg.
The current Museum days open and hours are:  Thursday, Friday, and Saturday
​10:00 AM to 3:00 PM.

Women in the Military 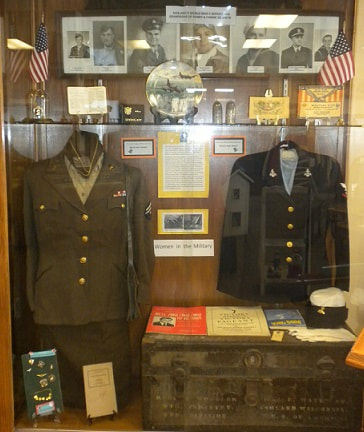 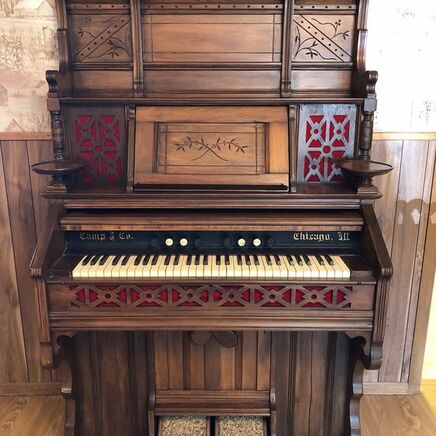 Pump it up!
This beautiful pump organ is on display at the Ashland Historical Society Museum. The organ was donated to the Museum in memory of Michael A. and Mary Ann Kehoe. When Mike and Mary Ann Kehoe purchased the County Poor Farm at 1319 Beaser Avenue in 1962, this pump organ was in the lobby. When the Kehoes retired 25 years later, they moved the organ to their home and had it refinished. 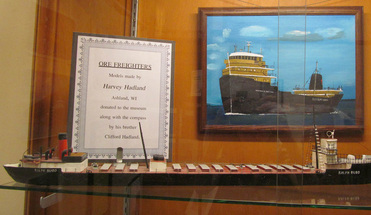 The late Harvey Hadland created wooden replicas of the ore freighters.  Built to scale, his attention to detail was precise, reflecting his interest in the freighters that were an everyday sight along the city’s lakefront during the early to middle 20th Century.

Hadland made models of ore freighters such as the Ralph Budd, Belle River, and Benson Ford, built in 1924 by the Ford Motor Co. to transport iron ore across the Ashland and the Great Lakes for steel to build the fledgling automobile industry. 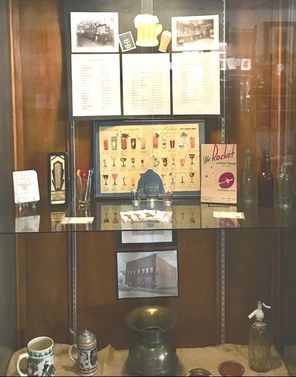 lt's Bar Time!
Tavern-keeping has long been one of the most thriving businesses in Ashland's history.  ​With that in mind, the Ashland Historical Society Museum celebrates this proud tradition with a look back at some of the great old watering holes that have served as gathering places for our citizens. 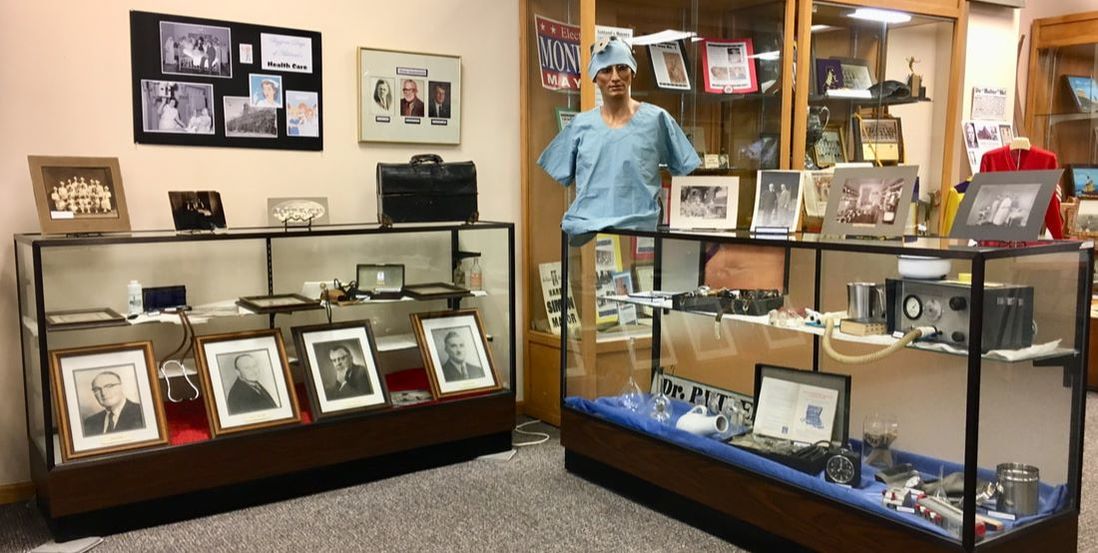 More than five generations of Ashland doctors, nurses, and medical equipment were on display in an early healers exhibit last winter at the Ashland Historical Society Museum. 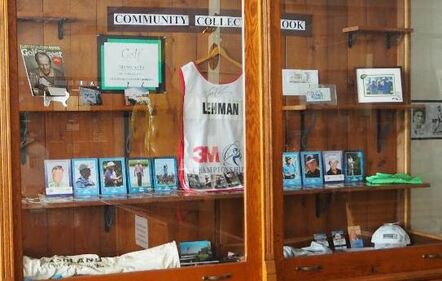 ​This impressive array of photos, autographs and memorabilia from the world of professional golf was on display in the Community Collection Nook on temporary loan to the Museum from Ashland resident Al Lundquist during the summer of 2018. 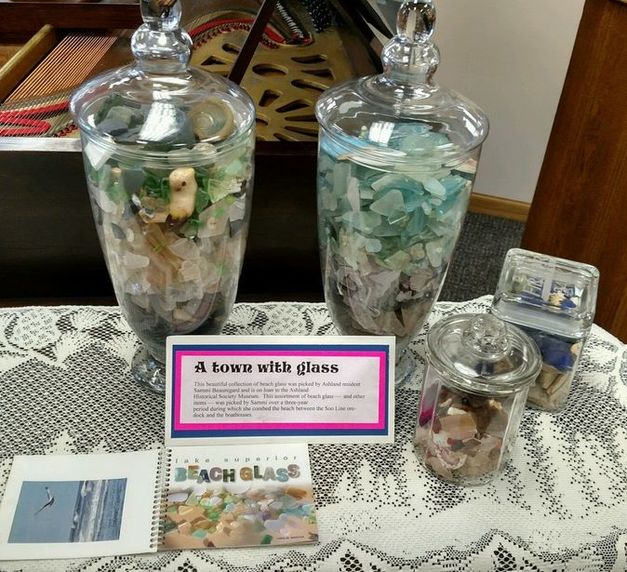 Beach Glass
This beautiful collection of beach glass was picked by Ashland resident Sammi Beauregard who picked the glass over a three period, between the Soo Line ore dock and the boathouses on Chequamegon Bay. 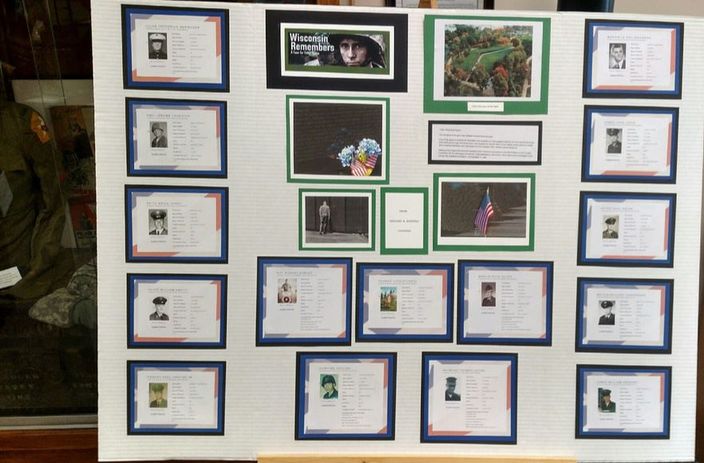 A past exhibit at the Ashland Historical Society Museum featured a mini-display of The Wisconsin Remembers Exhibit, which puts a face to every Wisconsin name listed on the Vietnam Veterans Memorial Wall in Washington, D.C.

The Museum's mini display offered pictures and bios of the 15 men from Ashland and Bayfield Counties who lost their lives in Vietnam, and serves as a subset of the 1,161 Wisconsinites officially listed on the wall.  The full Wisconsin exhibit was held at the Northern Great Lakes Visitor Center from September 23-25, 2017. 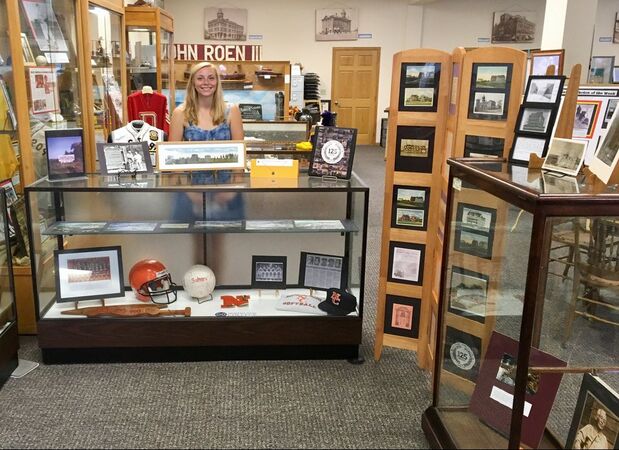 Siennah Schueller, Northland College intern with the Ashland Historical Society Museum, stands behind part of the exhibit that celebrated Northland’s 125th anniversary.  Northland was founded in 1892 as North Wisconsin Academy.
​Kennedy in Ashland: March of 1960​ 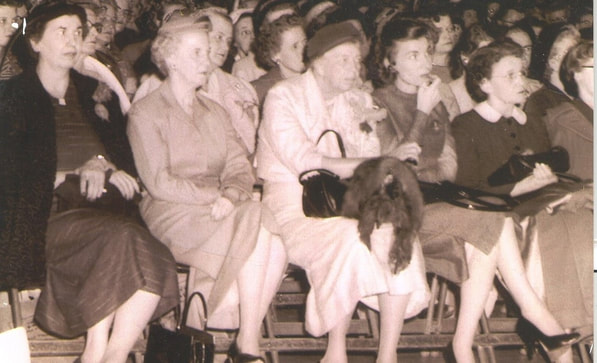 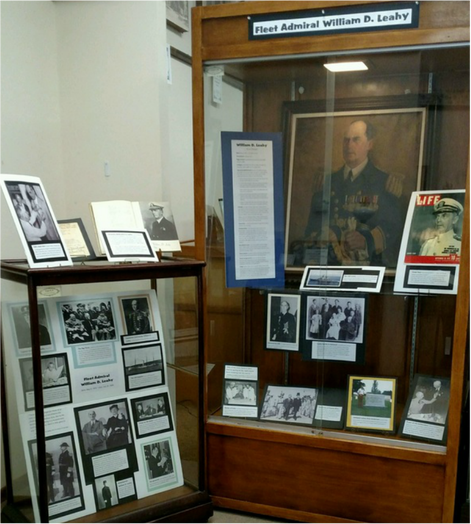 Hats off to 'Mrs. B'
Astrid Berthiaume, known to most as “Mrs. B” during her 48-year teaching career, was also “The Hat Lady,” collecting more than 500 hats in her lifetime. 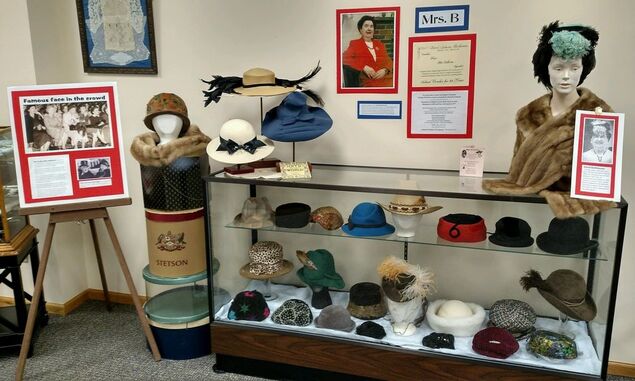 The Wreck of ​The Edmund Fitzgerald 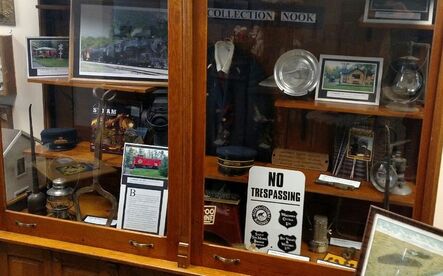 All aboard!
A small part of the collection of railroad artifacts and memorabilia owned by Ashland’s Bob Pufall was on display in the Community Collection Nook of the Ashland Historical Society Museum. 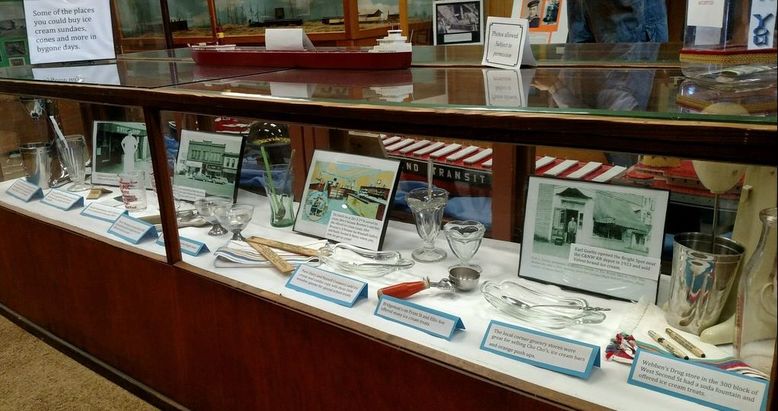 Some places to buy ice cream in bygone days of Ashland 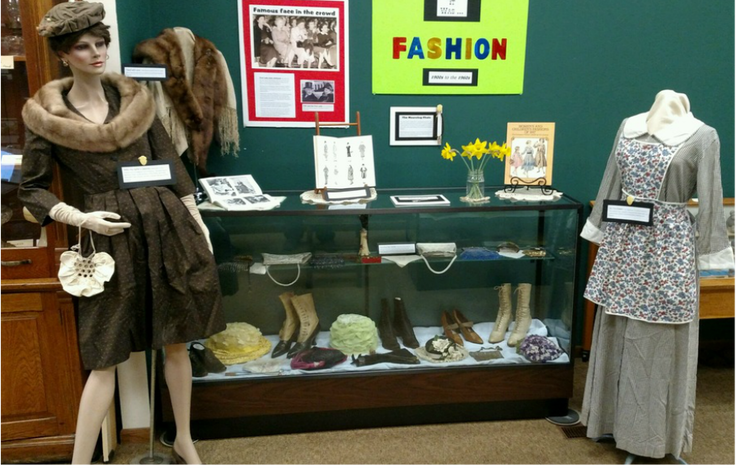 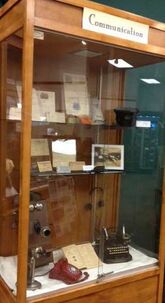 Communication is the critical link between man and his world.  The subject of the newest exhibit at the museum is communication.  From the bright red dial phone to the old-style typewriter, this display opens a window into historic ways of communication.

The invention of movable type is considered one of man’s greatest achievements, but the advent of cell phones and texting blows that out of the water.  In between these two great avenues of communication we include such ways to communicate as the telegraph, the telephone, signing, the personal typewriter, dictation and written letters.  Each of the methods of communication played a vital role in the everyday lives of folks all over the world, providing both information and careers.  Although letters are not as widely used anymore, with all the electronic ways to communicate, it is still exciting to receive a written letter through the mail and to anticipate its contents.

Some of you may have received the same graduation gift before going off to school--your very own typewriter.  These days they are obsolete, to say the least, with computers, iPads and other tablets taking their place.  During World War II, a telegraph could bring devastating news to many homes, but at times, good news, too.  Bradle’s Store near Our Lady of the Lake Church and School was the designated spot for sending and receiving telegrams.

Dr. George Harrison, the 1st, was instrumental in bringing the first power and light company to Ashland, which paved the way for telephones.  The Wisconsin Telephone Co. building was on the corner of Second Street and Second Avenue East.  The telephone company provided many jobs for people in the area, from linemen to operators and other jobs in between for such old timers like George Marker, Bernice Heiber, Neil Walworth, Ralph Korbein and Arnie Mathisen.

How many of you can remember the communication games of your youth?  Connecting two tin cans by string or wire to “call” each other from a distance; playing the telephone game where your sentence was repeated by friends in a circle many times to see if the original sentence stayed the same; creating secret codes for writing messages and many more ways for fun in the “old days”.